In the Kitch is reader-supported. External links may earn us a commission at no additional cost to you.

Soups are the perfect food for when you want to feel indulgent, but remain healthy at the same time. They are warm, comforting, and delicious. Leek and potato soup is an especially tasty recipe that incorporates the interest and crispness of leeks with the hearty and reliable potato.

With just six ingredients, you cannot go wrong on a cool fall or winter day with this simple yet delectable soup.

This leek and potato soup recipe adds texture with the simple to make frizzled leeks and a chicken broth adds depth of flavor to this veggie heavy dish.

It’s a great way to warm your home and keep everyone full and coming back for seconds. As with most soups, it is easy to prepare then keep warm until you are ready to serve.

It also makes for great leftovers and heats up well. The frizzled leeks add a full-bodied flavor to the puréed soup; just consider making a fresh batch of frizzled leeks when preparing on day two.

Looking for a vegetarian option? This recipe can be easily modified with a vegetable based broth. You can also try using different types of potatoes to vary the soup from one batch to another. 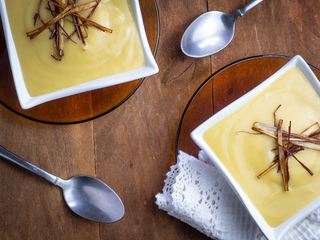 For the Frizzled Leeks:

For the Frizzled Leeks:

Nutrition information on In the Kitch is provided as a courtesy and is an estimate only. It may not include toppings and/or sauces.

Hungry for more? Try our: 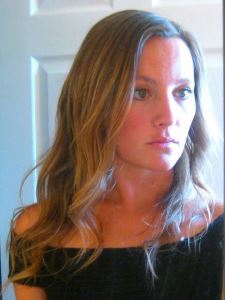